GitHub Copilot is a groundbreaking AI pair programer for developers, but we’re just beginning to explore the future of coding. Over the course of the technical preview, the Copilot team has improved the quality of suggestions and added safety features — but it’s not difficult to see the potential help that Copilot could offer beyond code suggestions.

Today, we’re launching a companion VS Code extension called GitHub Copilot Labs. It is separate from (and dependent on) the GitHub Copilot extension. While Copilot continues to march toward general availability, Labs will be a proving ground for experimental applications of machine learning that improve the developer experience.

Copilot Labs is intended to be experimental in nature, so things might break occasionally. We want to share early features with you to learn what works, what doesn’t, and incorporate your feedback. Labs experiments may or may not graduate into permanent features of GitHub Copilot, but with your help, they can inform future efforts.

What can Copilot Labs do?

Currently, Copilot Labs consists of a VS Code sidebar that houses distinct features. Currently there are four: code explanation, code translation, IDE Brushes and test generation. Once the Copilot Labs extension is installed, you'll see a

Copilot icon in the sidebar. Clicking on that will reveal the sidebar, with each experiment in a separate panel.

Every developer learns that writing new code is only a part of software development. Often, the hardest job that developers face is reading and understanding code. Whether it’s because it’s an unfamiliar codebase, or whether the code in question is using a library you might not know, the first step is getting a rough idea of what’s going on, so you can jump in and use the code, or make some changes.

This feature lets you highlight a block of code and ask GitHub Copilot to explain it in plain language:

We provide a few preset prompts to get you started: three that explain what a particular block of code does, and another that generates example code for calling a function.

You can customize the prompt and stop sequence of a query in order to come up with new applications that use Codex to interpret code. Creating these can feel more like an art than a science! Small changes in the formulation of the prompt and stop sequence can produce very different results. The three different “explain” examples showcase strategies that tend to produce useful responses from the model, but this is uncharted territory. We’re excited to see what you use this for.

These articles on prompt design and stop sequences are a great place to start if you want to craft your own presets.

Language translation works similarly to the explain feature: highlight a chunk of code, select the language you’d like to translate that code into, and hit the “Ask Copilot” button.

While the translations are imperfect, we think they can serve as good starting points for developers who are finding logic in the wild and adapting it to their needs in another language. Again, this is an experimental feature so we’re interested in hearing how you use it and how you might find it useful.

How to use Copilot Labs

We want to hear from you

As always, we’d love your thoughts so we can make Copilot Labs better over time, and find new ways to supercharge your developer experience! Please post your feedback on our discussion forum, and Tweet us @GitHubNext.

Eric Ávila
eavilaes
Gotta say, this is impressive✨ @GitHubNext Copilot can now: 1. generate code out of a comment, 2. explain what that code does, and 3. translate it into another language. https://t.co/VlcVGxcITe https://t.co/7PAAzGoDqt 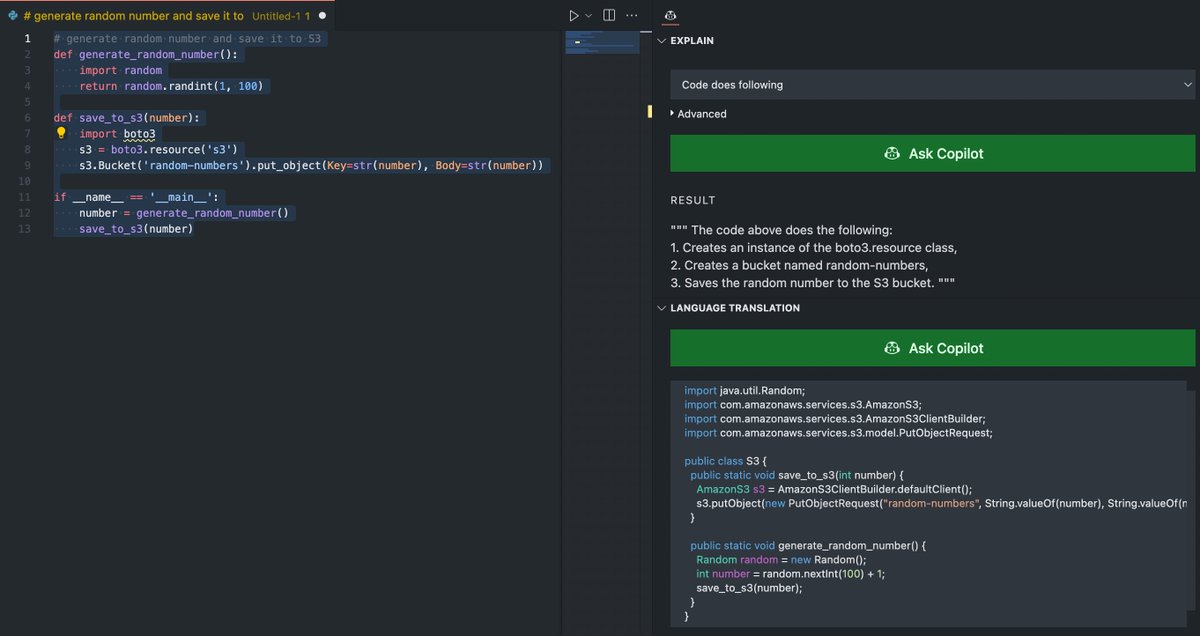 Austin
amcdnl
🤯🤯 The @github copilot is so amazing and they launched a new labs version. Its equally amazing at what it can do... Take a look at this function that it auto documented... 👉 https://t.co/KXXN7pDEx2 #github #copilot #opensource #javascript #typescript https://t.co/jp82UB31M7 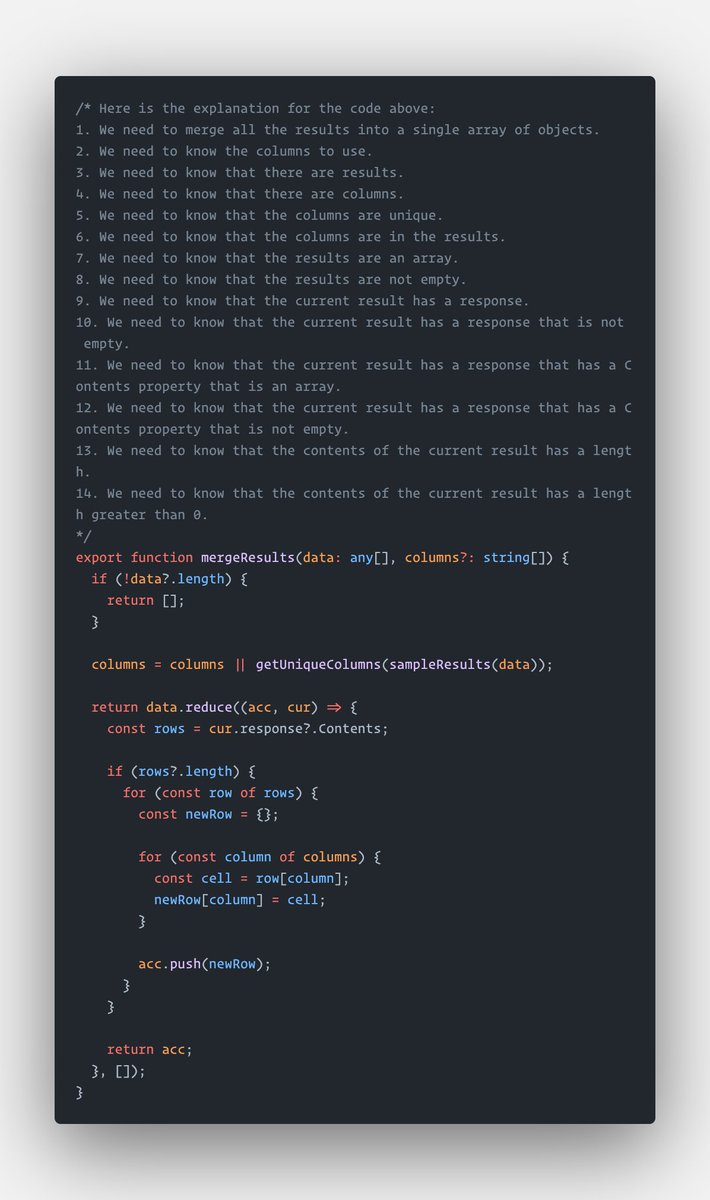 Subham Karmakar
SubhamK108
OH MY GOD! This, right here, is an ABSOLUTE GAME CHANGER! Specially for students / new developers. Honestly, I have so much admiration towards the @github Copilot and the VS @code teams! They're doing some amazing stuff with AI/ML to improve the Dev Experience. https://t.co/BYBYmNTfTk
Gus (🤖🧠+🐍+🥑🗣️)
gusthema
@GitHubNext I liked the extension very much!! Will definitely keep playing with it https://t.co/QQqo4v8CPd
James Croft 💙💛
jamesmcroft
Ooo, your code can easily be translated into another programming language by the power of AI 🤩 https://t.co/Lff0IEo838
Learn To Discover 🧠
L2D_Team
This is so cool! A Google Translate but for code 👩🏻‍💻✨👀 https://t.co/FOyJk3mQ2n
Arnaud Porterie / @arnaud@hachyderm.io
arnaudporterie
Google Translate, but for code 🤯 What the folks at @GitHubNext are building is unbelievably cool. https://t.co/xQ8xgCxcvo
Tom Gilder
tomgilder
Code translation is a game changer. Seems to work well. You could potentially port packages to other languages in minutes. https://t.co/pf18ayoAbW
Felix Leupold
xiel
How cool is that? Great for learning a new language or helps if you want to migrate (parts of) your app to a different language. e.g. JS -&gt; Rust/WebAssembly🦀 https://t.co/Cs0iEG9SlZ
Tejas Chaudhari
tejasness_
Github Copilot Labs is working great. This extension explained React 18's code very well without any mistakes. #GitHubCopilot #GitHubCopilotLabs @GitHubNext https://t.co/9cVDD5Wqg7

Afif.ts 😀
afifsohaili
AI can explain code now Crazy https://t.co/GewPhOxIwK
Matt Aimonetti
mattetti
Running Copilot Labs against some crypto Go code and the explanation is quite good. The translation to Rust is also really cool! (Rustacean, what do you think?) https://t.co/lxWxiZ5aaI 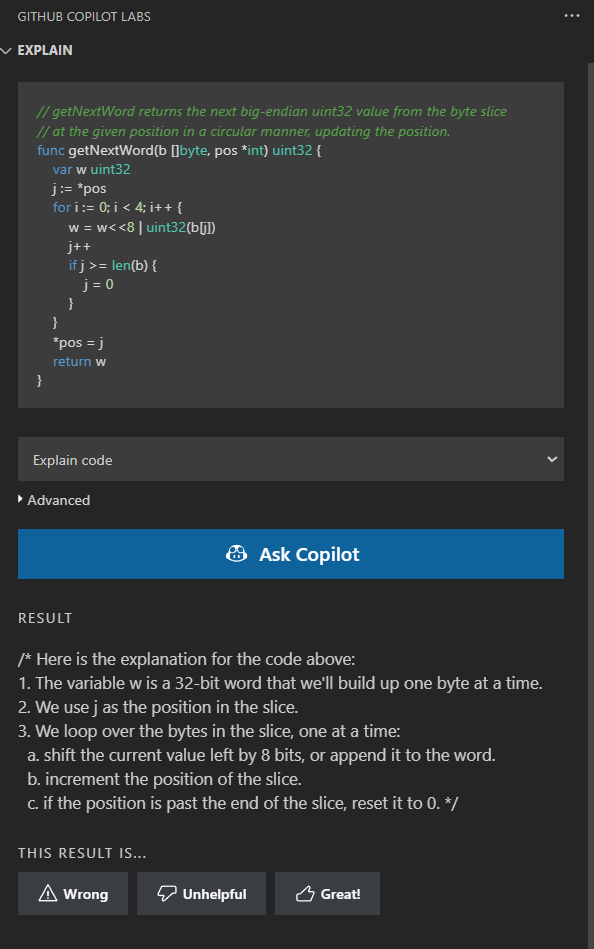 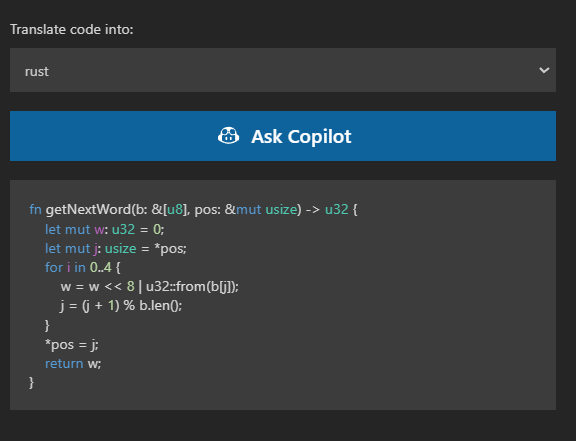 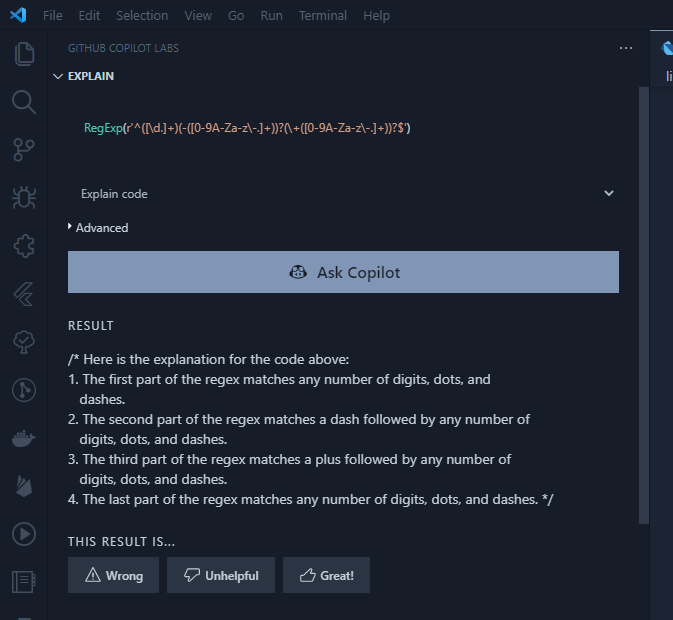 Scott Arbeit
ScottArbeit
GitHub is going to start blowing your mind with ML. Copilot is AMAZING. And it's just getting started. https://t.co/brDgJpNpQV
Maarten Van Hoof → @mrtnvh@techhub.social
mrtnvh
Finally a way to understand reducers. https://t.co/FWZmZwpFuF
BeGuillaume 💙
BeGuillaume
Going from @FlutterDev to @reactnative with @GitHubNext Labs?! 🤯 I wanted to do it the other way but I don't have any RN code on my computer😛 https://t.co/OFpizEhrrx 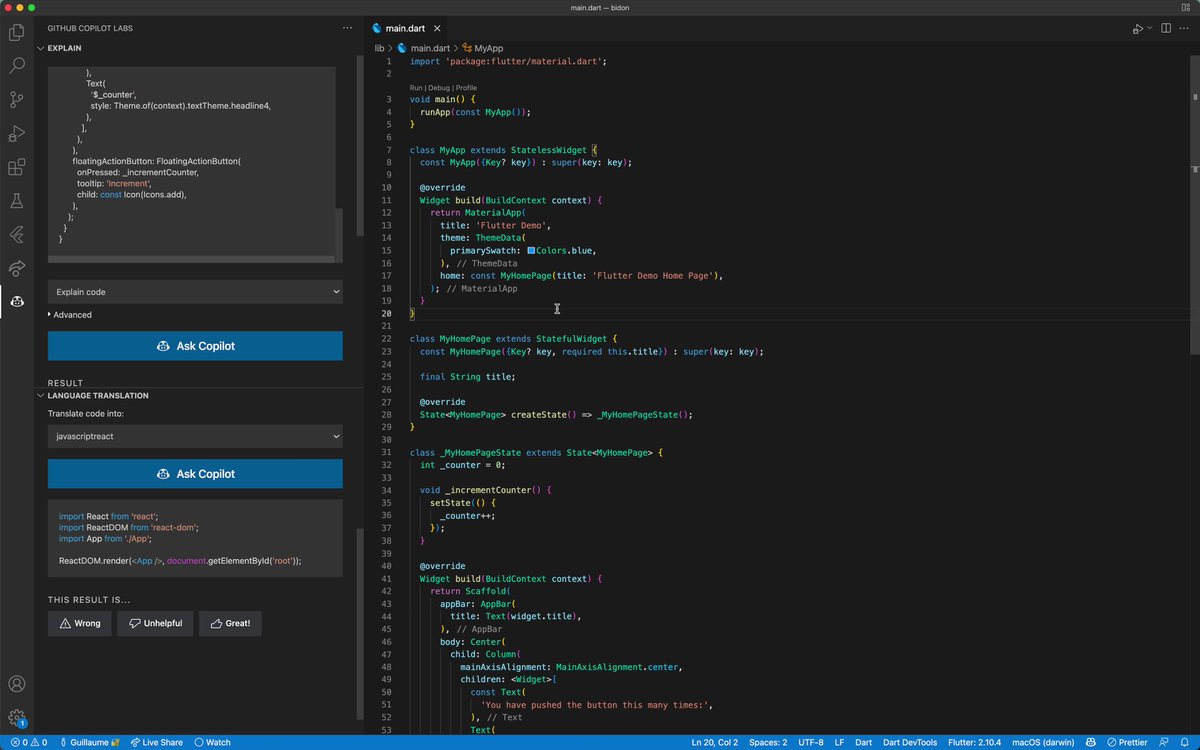 olúwatóbijù judah
tobijudah
just tried this out and it's so cool https://t.co/2gHtqaQpub
Placebo Domingo | @brbcoding@indieweb.social
brbcoding
Haha this is crazy dope! Now I can put all the languages on my resume 👊 https://t.co/QCca8UWBwO
Amr Hassan
amrh434
Now I won't need to specify the language on stackoverflow https://t.co/b0sZYyVwQ4
WeValCo
wevalco
@GitHubNext @github @code Wow thats an awesome tool expecally for beginners!
Rajiv Verma | The Full-Stack Guy 🧑‍💻
hackernewbie
Wow! Now this is going to be really interesting when going through old code/code written by someone else. No need to use your brain anymore 🧠 😜 https://t.co/4ylha2sIs6